Starts with CIBC and ends in Jungle Cottages. Wednesday evening ended with an unexpected email from the CIBC stating that a transaction had been declined due to a suspect ATM withdrawal etc. Contact was made with the bank via chat and secure messenger including requested codes etc. The next day further messages required personal voice contact! Not having any telephone with Indian provider service the only option was Skype! Having not used it for sometime and sometimes sketchy internet the challenge was on, thankfully it was activated very smoothly. The call was kept on hold for 30 minutes before answering and after mild abuse revealed that the aborted ATM transactions had been the trigger. And the reading of the magnetic strip was the culprit, but after everything was cleared, the card was good to go. 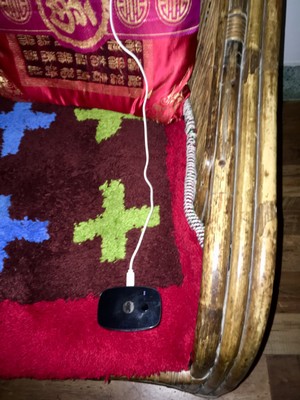 The rest of the day was spent puttering around “downtown” Gangtok otherwise known as MG Market. The biggest chore was mailing gifts and souvenirs back home, which was probably the biggest task of DHL that day. I had left that afternoon with this magic Indian device called a Jio which allows wifi access wherever you are in range! This was very fortuitous, or not as it transpires, for the host at the next stop to call me on WhatsApp. He wanted to meet us and explain details of the next location. The mailing wasn’t completed and we still had to eat so I suggested he call our host. When we returned the host explained we needed another visa to reach our next destination and that one of the requirements was a paper copy of our Sikkim visa! We were never given this? No problem Pepe’s, our host would sort it. The next day we set off on another round of Buddha visits early with a packed breakfast. Shortly before the breakfast stop a phone call to the driver when I spoke to the next host re the missing visa etc when I suggested he call our present host to see if she could assist. Eventually it was decided that to get this new visa we must return to the check point to retrieve the “lost” paper copy! 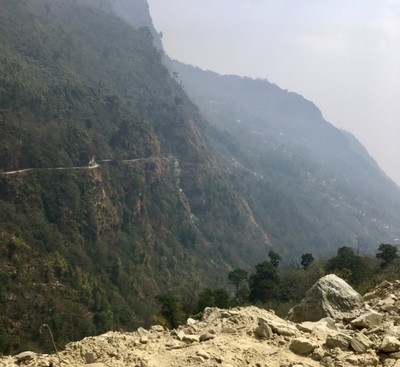 Anyway the journey continued to Buddha Park via what can only be described as one of the scariest routes in India. The track often broken by land slips, was in places only wide enough for one vehicle even though it was 2 way, the edge next to the 1000 meters drop often unguarded and blind corners. This was the very definition of a white knuckle ride and during this mobile calls to the driver who continued driving. 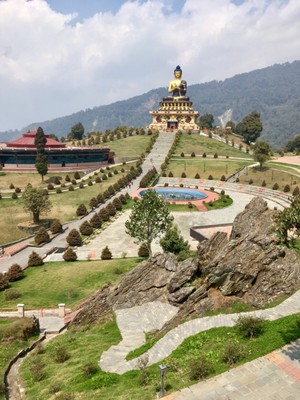 Eventually we arrived shaken but not stirred at Buddha Park! The Buddha Park of Ravangla, also known as Tathagata Tsal, is situated near Rabong (Ravangla) in South Sikkim district, Sikkim, India. It was constructed between 2006 and 2013 and features a 130-foot (40 m) high statue of the Buddha as its centerpiece. The site was chosen within the larger religious complex of the Rabong Gompa (Monastery), itself a centuries-old place of pilgrimage. Also nearby is Ralang Monastery, a key monastery in Tibetan Buddhism. And I quote Wikipedia. 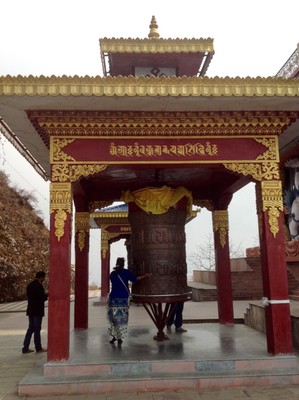 Then on to Guru Padmasambhava temple etc and the surprising gondola ride. 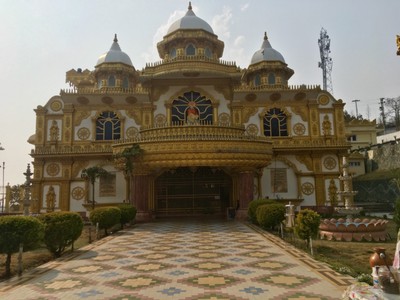 And on to Namchi and another temple, whilst Gail had visited the interior of the previous temples leaving me to check out the surroundings and reporting back after. This was becoming increasingly tedious and no interiors were reported for this one. 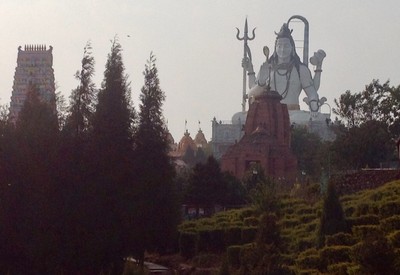 The next became a non starter and only shots of the exterior from distance resulted. 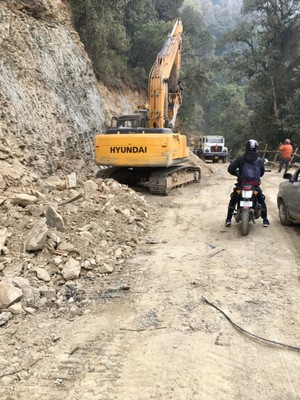 During all of this the driver continued to receive calls, some I could identify as emanating via the visa issue. As we headed towards Ringpo where the Sikkim visa was issued, the driver I could sense was tiring and shortly after he stopped for a coffee. Fortunately the road down to Ringpo was well paved and traffic relatively quiet but full of hair pin turns. Eventually we arrived as evening was approaching. The Visa office was still busy but not as busy as before, after some discussion the driver was sent to retrieve the copies. During his absence during a conversation between 2 of the officials one retrieved a copy of something from a box by his desk put a line through it and binned it. The driver returned with our “lost” visa copies to go and get them copied for fresh copy to be issued! Eventually as darkness fell we set off back for Gangtok the traffic was lighter but the driving as hair raising and still the calls continued sometimes answered sometimes not, sometimes stopping to call. In total by the end of the day he must have received upwards of 30. As we approached Gangtok and one last phone call I irrupted telling him that in Canada it was illegal to use a phone call while driving. We finally returned by about 7:30 pm where host met us. We were tired, very hungry and thirsty so we retired with our host to the restaurant nearby. Where we vented our frustration and she thought that many of the calls had been generated by the “lost” visa and admin re the new one but it would all be sorted in time for the next destination. I also expressed some remorse for the driver who was caught in the middle of this unfortunate problem. One unexpected and unwanted other issue was that we could only stay 4 nights there because it is a sensitive area! This had never been mentioned nor the need for the new visa! The chosen solution by our next host had been for us to stay 4 days, leave for another guest house for 2 days then return. 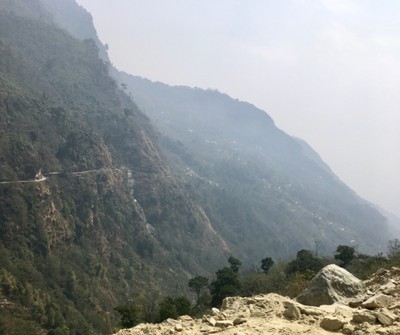 After a terrible day and having no desire for another taxi ride in the mountains I decided this wasn’t happening. Eventually after much more negotiations and deliberation it was decided that we will go tomorrow Sunday to the Jungle Cottages for the 3 day duration of the visa, newly negotiated taxi fare to the cottages and the ride to the next destination closer to the airport in Bodagra. Included in the deliberations was of course the cost verses the revenues already received and the risk of a negative Airbnb review. The final destination is no downgrade however so I honours are even.