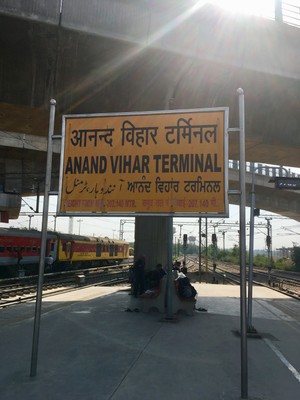 Ok where we. Seems like a long time ago, Thursday we took the taxi through the chaos of Delhi traffic 650 rupees got us to the station, the spot rate for loonie to rupee is around 52. There seemed to be few porters around, the first person who showed any interest in our ticket sent us to platform 2, there the man in a booth told us 5. When we got there, again no one around to direct us to our berths except a young person with a pile of blankets who sent me to the first cabin with 4 berths. Still with plenty of time before departure we sat on the platform watching the people go by. When we returned to the cabin there were 4 other people in it! One of the passengers spoke English and started making calls and found our correct cabin. This one already had one passenger. No matter after much discussion it was decided I was too infirm to take the upper berth and right on time we left! I had ordered 2 thalis on line and after some confusion over my use of our caretakers phone number the order was left. I never realised how flat this part of India could be, acres and acres of rice paddies with a few plots of sugar cane and some mixed livestock. The sun set around 6:30 and after a while everyone settles in for the night. At the first station stop another passenger joined us to take the vacant upper berth. Before arriving at NJP both our fellow travellers left us. The train arrived outside NJP late which is consistent with its record but compounded it by waiting another hour! The train still had another 600 Kms to reach its destination and the platform was crowded with waiting passengers. A man not much more than a metre and a half volunteered for 200 rupees to carry our bags. Gail thought they were too heavy and he was too old, but we set off in pursuit. He was more than happy as I paid him and left Gail with the bags to meet our next challenge. I had booked but hadn’t been able to get an accurate address because the internet in Delhi had crashed. However the taxi station in NJP is super efficient and after making numerous calls and an agreed price we took off. Again the driver made further calls because he had no street address which sometimes seems optional? He left us in a place where the operator seemed surprised and happy to receive us and after taking our passports and a 1000 rupees for 2 kingfisher and a visa for Sikkim took us to a room even locals would reject. There was much nashing of teeth and discussion of options, fortunately the “real” host came and rescued us. We were only a few meters from our destination and the other operator had denied our presence when asked. So after 2 more kingfishers. We retired much comforted to have found a nice comfortable clean bed. Saturday didn’t start so well our breakfast options were limited to the local tourist hotel which was apparently hosting a wedding party and offered a menu suited to local taste but not much for ours. Returning for our bags we went in search of a shared taxi for Gangtok. Most of the taxis were destined for Darjeeling but one would take the 2 of us including a stop for the Sikkim visa for 1800. Since waiting for other passengers to share might take much longer we agreed. After stick handling around Siliguree we headed for the hills. I don’t know if there is a shooting war against Pakistan but there is a lot military outside Siliguree, one being the India and Tibet border police. The road in places has been damaged by rain and land slips as the land falls away into the valley hundreds of meters below. The stop for Sikkim visa was a bit of a song and dance the office was full of people and the usual chaos, we had been told we didn’t need one but after getting the mandatory photocopies of Indian visa page and bio we jumped the 59 other applicants and carried on. The road getting no better eventually arriving in Gangtok around 3:30 as it began to rain. Supper took about 2 hours because the restaurant nearby was hosting a children’s birthday party. The food was excellent and the Dansberg beer perfect, time to relax. 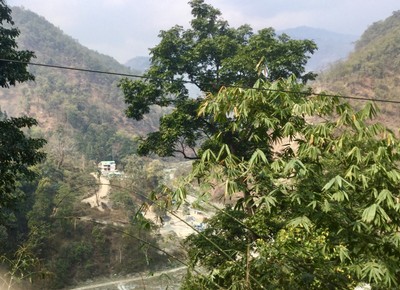